Outfit is a well renowned fashion retail company. The company’s head office is located in the Melbourne CBD. The head office consists of three departments: general support, marketing, and sales. General support is located on the first floor, while the marketing and the sales departments are located on second and third floors of the building respectively. General support has 12 workstations, marketing has 15 workstations, and sales has 20 workstations. Some applications require that data be shared between departments, but generally, each department has its own applications. Every workstation needs access to the Internet, the company internal Internet (intranet), and e-mail. Each floor has a printer connected on the network. The head office also requires wireless internet connectivity for all the floors.

The company is also planning to establish five offices in Brisbane, Adelaide, Sydney, Canberra, and Darwin. According to the specifications provided, the most user resource requirements will be met by servers located in the same office as the users who need to access them. The main communication requirements between offices relate to print jobs, e-mails and periodic file transfers.

Write a report with following sections:

Every workstation at each department has a wireless internet connectivity throughout all three floors. The organisation is now planning to start five new offices at five different locations, as Adelaide, Brisbane, Canberra, Sydney and Darwin. A server is configured at every location which manage the company resources and provide access to the users who need them. For the major communication requirements between other branch offices are related to email access, printer access and file transfer on periodic basis.

Now we are tasked to by the area manager of the organisation to prepare a network design to communicate the users at that branch office location (all five new locations) locally, to other branch offices and to the head office location. The designed network should be equipped with both wired and wireless network. This report has described the network design which consist of a LAN and WAN design for the five new office locations and head office and describe the related details of used equipment, LAN and WAN topology, protocol, role of network operating system, used media type and the type of network structure.

Here is the local area network (LAN) design for the head office along with the five new branch offices. This network design consists of some routers, switches, firewalls, wireless access points, printers, and several wired and wireless end user devices. This designed network is based on the hierarchical network design where all the used networking devices are used in a hierarchical form. Here we have three and two-tier hierarchy models to be used in this network. The core networking devices such as router, switches and firewall will form a layered architecture in each building. The end user devices such as desktop computers, laptops and printers are connected with access layer device as of switch for wired network and wireless access point for wireless network. At the starting of the network, a router is placed which is prior connected with a firewall and on the other side, it is connected with a switch in two-tier hierarchical model. This ethernet switch provide wired connectivity to all the devices at this department this include a printer, computer and wireless access points. The WAP is also connected with this switch and provide wireless connectivity to the wireless client devices, can be seen at [1].

The preferred LAN topology is STAR topology where all the devices are connected with a central device, switch for the ethernet network and wireless access point (WAP) for the wireless network. This topology is very simple to configure, easy to manage and troubleshooting is also easy whenever needed for loss of connectivity of device, can be seen at [2]. 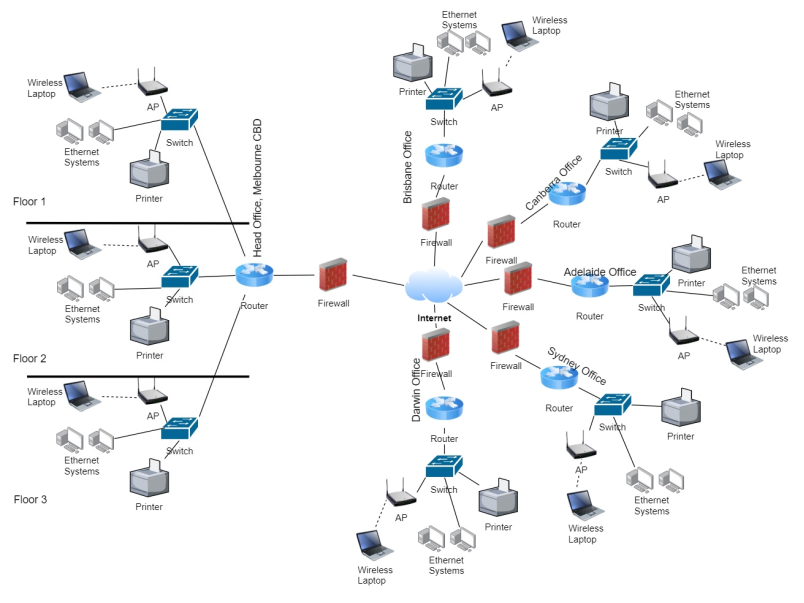 For both wired and wireless network in this topology, we recommend to use the OSPF (open shortest path first). It is an interior gateway protocol of IP routing family. This protocol is best suited for small to medium size network. It works on Dijkstra algorithm to minimize the routing traffic, support multiple paths with shorter path cost, multi-level hierarchy for area routing and authenticated exchange of routing within an autonomous system (AS), can be seen at [3]. For wired connectivity, we will use CAT 6 cables. This cable type provides high performance, protection from crosstalk and system noise. It provides throughput speed of up to 10 gigabit per second at the speed of 250 MHz with 10 Base-T cable, can be seen at [4]. And for wireless connectivity, we have wireless access points. These wireless APs are configured to work with ethernet network using wireless LAN technology such as Wi-Fi, can be seen at [5]. For internet connectivity to the head office and all other branch site locations, we will have a leased line internet facility. A leased line is a dedicated internet connection to a customer location which provide high speed data connectivity with reliability. It offers benefits over other internet connectivity options such as faster download and upload speed, resiliency in the network, cost effective and guarantee to uptime, can be seen at [6].

A network operating system or NOS provide services to the clients over network. It can be used in both client-server and peer to peer network models and provide and handle typical networking services like, listed below –

A best suitable network operating system for the organisation will be a Windows server which provide so many networking services like active directory service to effectively manage database, user, network administration, access control, authentication, user credentials; compatible with various clients; interoperable with older operating systems; support different type of authentication, print, file and data service and offer better security to the whole network infrastructure, can be seen at [7].

The wide area network or WAN design is provided below for the organisation. This WAN network is used to connect the five branch offices to the head office via internet. The core router is mainly responsible for this WAN connectivity which connects a site to the internet and internet to the specific site. The below double lines show the WAN links between the sites and to the head office. 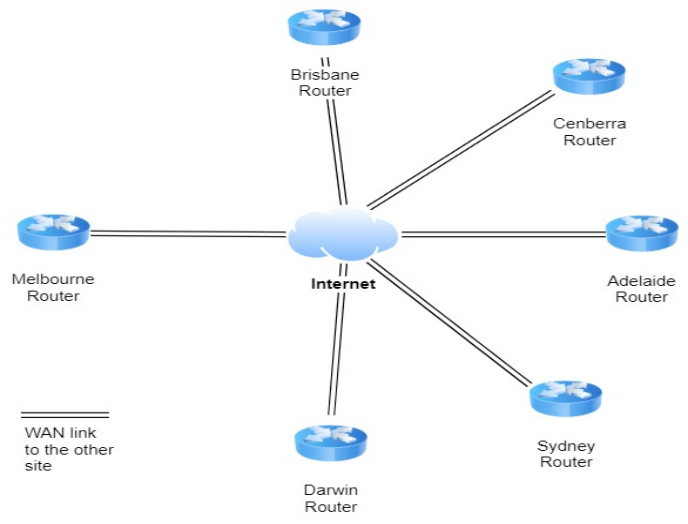 A firewall is configured just after the core router to provide protection to the entire internal network. It safeguards the internal network from external attacks, provide access control, and such more features. For the WAN connectivity between the sites, recommended media type is fibre optic cable. This cable type is mostly used in wide area networks to provide better connectivity with faster throughput. Fibre optic provide enormously higher data rates over longer distance so that communication between the remote sites will become faster. The WAN connection use common standards for the exchange of data such as SONET (synchronous optical networking) or SDH (synchronous digital hierarchy). These WAN standards define how to transfer data over high speed to the longer distance of thousands of kilometres, can be seen at [8]. While there are two switching technologies named as packet switching and circuit switching, we preferred to use packet switching technology in this network. There are so many benefits of a packet switching technology over a circuit switching technology. A packet switching methods breaks a data streams into small chunk of data. These small chunks will then be directed individualistically over a collective network. This technology will share the bandwidth between the resources equally without compromising with quality of data. This is beneficial to use for the network where real time response is not necessary. Besides this, packet switching is more cost effective and affordable as compared to circuit switching technology. It is more efficient in the terms of not dealing with limited number of connections at a time but have a large set of connections with not using whole bandwidth. As compare to circuit switching, it is more resistance to failure and failing nodes can be easily be responded with no higher cost, can be seen at [9].

In this assignment report, we work on the provided case study of a fashion retail company and all its requirements for designing a new network design, as they wan to expand their company on another five locations. A recommended local area network is designed and presented in the report which detail all the required networking devices to design the required network for the company like router, switch, firewall, computer, printer, etc. The entire network works over a combination of wired and wireless network with relevant topology. A leased line connection is recommended to meet their internet access demand and a preferred network operating system, windows, is describe with its uses. A suitable wide area network design is also there which connects all five branch offices with the head office via an ISP (via internet). The recommended media type, fibre optic cables for WAN and CAT 6 cable for LAN, is described in the relevant sections with their benefits of use with compared to other equipment. The packet switching technology is used in this network structure combined with synchronous transmission mode. Both of these technologies are discussed in detail with their benefits and comparison with other related technologies. A best suited routing protocol is discussed in this report with recommendations. The complete network design and related technologies are best suited to the company demand and meeting their requirements of expanding the current network.