THE UNIVERSITY OF AUCKLAND

Weighting:This assignment is worth 20% of your final grade and is marked out of 32.

Word count:The stipulated word count for the report is 1200 words (±10%, line spacing 1.5, font and size: Times New Roman 12). The word count includes tables but excludes the cover page and appendices, if any. Your executive summary should be on the cover page and should not exceed 150 words.

or other statistical software. Please note that graphs, tables and charts should only be used to add real value to the analysis, so they need to be selected and created carefully and referred to in your text.

Other instructions:A draft can be submitted via Canvas for language

feedback from the Business Communication Team, up to 48 hours prior to the submission deadline. Answers should be word processed in Word or PDF format.

References:You should use a minimum of 4 references in APA7 format to support your analysis in the sections A2 and B, BUT NOT for A1, as you are only required to compute and work with the data provided.

(in-text references are included in the word limit, but the references list is excluded)

This assignment links to the following learning outcomes:

LO3: Extract relevant patterns from sets of data to transform into information and interpret the results effectively. (Capability 3)

LO4: Communicate findings, results and recommendations from business analysis models verbally and in a written manner to the audience from a variety of backgrounds. (Capability 4.1 and 4.2)

LO5: Apply the concepts, tools and practices including data collection techniques to contribute to the managerial decision-making process. (Capability 1 and 2)

And helps to develop these Graduate Attributes:

You are an economist working for a leading independent New Zealand economic consultancy – GSM Consulting.

Your manager, Dr Wang, has tasked you with writing a report highlighting key insights regarding the impacts of COVID-19 on global health outcomes and the world economy in 2020. To do so, he has provided you with a dataset. The dataset includes all records of daily total cases and total deaths for Group 8 countries, BRICS countries and New Zealand from January 2020 to October 2020. The dataset also includes other socio-economic variables for these countries such as monthly GDP growth rate, monthly stringency index, monthly export and import value, monthly interest rate, and annual GDP per capita, amongst others.

Please work only with the data that has been provided and do not seek or include additional variables outside of the data set in your analysis. However, you may derive new variables by using the existing data provided; for example, you can derive a ratio which equals ‘Export value’ divided by ‘Import value’ if it would provide useful insights for your discussion.

The detailed data is available in an Excel file called “COVID19.xls” which has been uploaded to module ‘B’: Important Information & Assessments for This Couse’ on Canvas.

Dr Wang would like you to analyse the data provided using descriptive methods of analysis (which means you do not have to use other kinds of analytics such as regressions for this report). Therefore, your analysis should include descriptive statistics (such as mean, median, standard deviation, correlation, distribution, confidence interval, hypothesis testing etc.) as well as visualisations of the data. Both sections A and B are compulsory and must be answered.

How has COVID-19 impacted on the world economy? Choose only ONE of the following dimensions for your answer.

As an economist with an independent New Zealand consultancy called GSM Consulting, the following report analyses provided data for 14 countries (Group 8 countries, BRICS countries, and New Zealand) across the world. The data relates to various economic indicators for the countries for the period of January 2020 to October 2020. Further, the data has been analyzed with respect to the impact of COVID-19 on various countries.

The findings indicate that the pandemic had not only economic impact but may also have caused disruptive changes in the way businesses are conducted across the world. The online services have been major gainers and IT sector may present multiple opportunities.

Part A: Health-related variables/data
General impact of the COVID-19 pandemic

The following screenshot presents descriptive analysis for all the variables in the dataset: 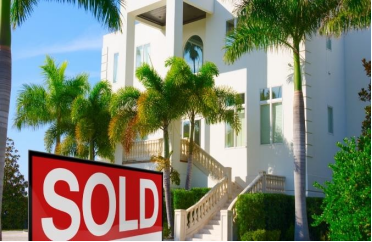 The business confidence index averaged to 39.66 while the FDI stood at 128.5 million USD. The average export and import stood at 611.93 million USD and 605.06 million USD, respectively.

The above data indicates the impact of COVID-19 whereby there was a high number of cases and deaths averaging to almost 4% of the reported cases. This had such a vast economic impact on the considered countries that there average GDP growth rate turned negative. The depressing economic scenario is also evident in high unemployment rates and low business confidence index. The efforts to resuscitate economy is visible in low interest rates that maybe stimulating the economy to some extent.

The high range, standard deviation, standard errors and variance indicate high degree of fluctuations and presence of outliers in the dataset. This is justified as COVID-19 pandemic presented a very unique situation that had powerful impact on economy.

The following graphs present number of cases and number of deaths in each of the countries over the period of January, 2020 till October, 2020: 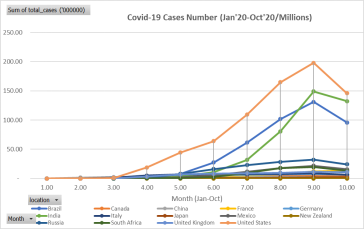 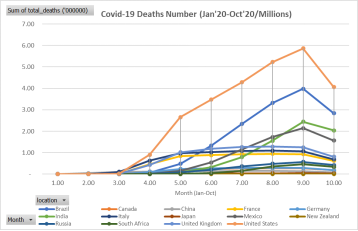 It can be seen that the highest number of cases and deaths were reported in the United States with the number peaking in September, 2020. Usually, all the countries seem to be following same pattern where the number of cases increased gradually and the maximum built-up was July, 2020 onwards. However, United States saw increase in deaths May onwards itself. This indicates that the country had a huge spread of the pandemic.

The least number of cases and deaths seem to be in New Zealand and Japan. The picture further becomes clearer with following pie charts: 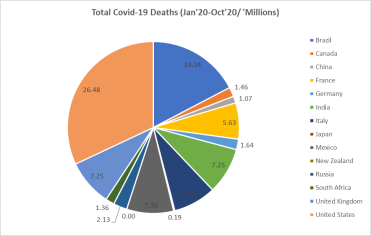 In order to further understand, the number of deaths as a percentage of population as well as total cases has been graphed as follows: 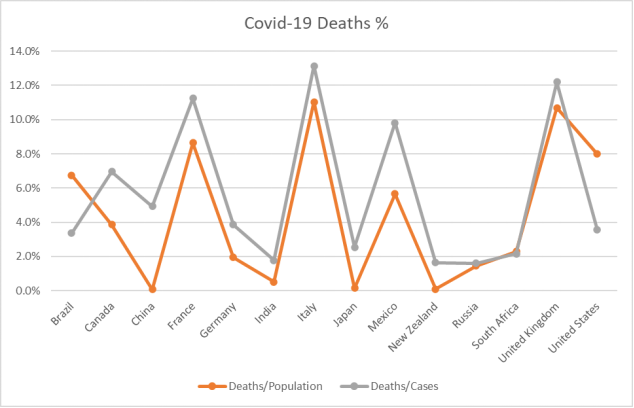 Further, a table was created to find the countries with the maximum and minimum value for each variable as follows:

It can be seen that despite the highest number of cases and deaths, United States also had the highest GDP per capita and imports. Whereas, China had the highest stringency index, highest exports, highest GDP growth rate and highest FDI. This indicates that Chinese economy remained strong with low level of reported cases and deaths and being positioned at highest exports and also growth rate of GDP which is crucial. The confidence in China is also indicated through FDI amount which was the highest for China.

Hence, it seems that China is better positioned to recover from the pandemic with the important indicators in place and COVID seemingly under control.

Part B: How has COVID-19 impacted on the world economy, particularly, the impact on business environment?

The provided dataset provides business confidence index for all the countries at various points of time from January till October. Overall, the index reflected a mean of 39.66, median of 47.60 and mode of 105.00. The data for the index was slightly negatively skewed with a skew of -0.11 indicating that the distribution is approximately symmetric. The low kurtosis value of 0.27 indicates that the shape is approximately normal and not too peaked or too flat. 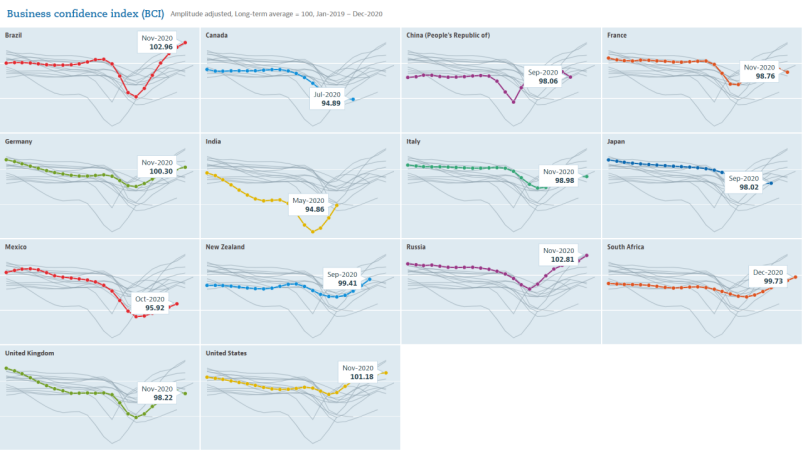 It can be seen that for all the 14 countries, the confidence took a steep dip during the pandemic as there was an increased uncertainty in the business environment. The index fell below 100 indicating pessimism for business performance in nearby future. However, the index seems to be recovering from the shock but is still below 100 for majority of economies.

The pandemic caused compulsory lockdowns across countries in order to control the spread of corona virus. However, this lockdown caused a high degree of shock to the economic environment as the citizens became locked in the houses and the economic activities came to a standstill, barring essential commodities (McKinsey & Company, 2021).

The demand and consumption went down dramatically leading to a halt in economic cycle and fall in GDP as well as growth rates. This obviously was a major setback for the business environment as people became cautious and saving rates also increased. The major losers in business arena were travel, tourism and hospitality industries followed by retail sectors as these were hit severely due to obstructed movement of citizens in all countries (Donthu & Gustafsson, 2020 and Campbell, 2020).

The above discussion indicates the far-flung impact of COVID-19 on various aspects of a country, be it health of the citizens, various economic indicators, indices dipping to bottom, business environment and overall economic setback facing the countries. The impact has been multi-fold and will take a long time to recover. Further, based on the data considered, out of the given countries, China seems poised to recover the best and the fastest as rest of the economies’ growth rates are in a pit.

Additionally, the pandemic may have caused disruptive changes in business models as work from home and online education became a norm for almost an year. Hence, online platforms and IT sector are the gainers while the major losers include tourism, travel, hospitality and retail sectors.