“Character strengths” are a key area in positive psychology, in which managers and employees can develop their self-awareness and skills for more positive individual and workplace outcomes. This project is designed to allow you to explore and engage with your own character strengths at a more

in-depth level by developing both a theoretical and applied understanding of them, in the context of a major disruption including the widespread bushfires in Australia and global COVID-19 outbreak.

Your project will require you to complete two main tasks:

PART A: (60%) Write a literature review of four published articles/ academic book chapters on the topic of character strengths; and

PART B: (40%) Participate via daily UTS Canvas announcements in a one week program of self-development that allows you to actively engage with the topic in a way which improves your self-awareness and knowledge, including completing daily activities and a reflection task.

For more details of the resources and assessment rubric please see UTS Canvas for Assessment Task 1.

PART A. ARTICLE SUMMARY AND REVIEW

You are required to find a minimum of four relevant articles from scholarly journals or well referenced chapters in academic books relating to the topic of character strengths as discussed in the Week 3 lecture and tutorial. The articles and book chapters should relate directly to the topic. As a starting point, have at the look materials available on UTS Canvas.

Provide an overview of the theory and development of character strengths and its role in positive psychology, referencing major theorists. Choose some key points to discuss using all the papers you have read. Compare and contrast the arguments and assumptions in the different articles.

See under Assessment 1 on UTS Canvas for guidance on "Writing a Literature Review". Some examples of scholarly journals to look for your articles include (but are not limited to):

Character strength reflects the competent attributes that possess valuable qualities and traits in an individual. Employers seek people with better calibre who have the intention to provide positive and better outcomes in the workplace (Matter, 2018). The essay evaluates the strength of character that has the potential to develop self-awareness to respond in any critical situation. The essay compares and contrasts the arguments presented in different articles that deals with character strength and its role in positive psychology.  The essay also provides the scope of exploring personal character strength and understanding them in critical situations.

As exemplified by Peterson and Seligman (2004), the character strength is universal attributes that are esteemed in their own right. The attributes not necessarily have to project their substantial outcomes. The strength of a character represented by an individual supports in elevating the characters of others with admiration and positive expression. Research on character strength based on subjective wellbeing (SWB) and psychological wellbeing (PWB) projects different dimensions of the wellbeing of the individuals (Hausier et al. 2017). The practitioners in positive psychology have demonstrated good character under six virtues. The good character resembles 24 wide-range of character strength through the assessment of Values in Action (VIA) that supports strengthening the characters of individuals by improving and addressing the challenges in life to attain emotional wellbeing (Berger & McGrath, 2019). In recent years a stable three-factor framework of Caring, Self-Control, and Inquisitiveness has been the empirically relevant model to identify the strengths.

The core virtues in the VIA classification describes Wisdom and Knowledge, Humanity, Courage, Justice, Transcendence and Temperance. Character strength reflects the positive attributes of an individual's behaviour, feelings, thoughts, and attitude. The researchers conducting trials on this topic of evaluating character strength suggested that identifying individual strength can act as a defence shield against mental depression or ailments (Park & Peterson, 2009). For example, the character strength involving hope, social intelligence, kindness, and self-control help in acting as a buffer to the negative stressors, including trauma, depression and other mental health issues.  When focused on positivity, the character strength helps in achieving success, leadership, understanding, and appreciating diversity and developing the ability to delay gratification. . 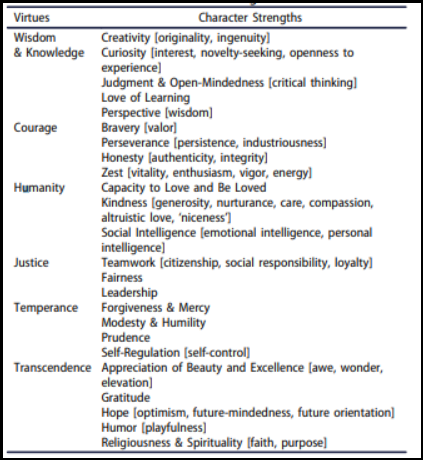 Figure 1: The adaptation of the Character Strengths and Virtues

Discussion on the role of character strength in positive psychology

According to Seligman & Csikszentmihalyi (2014), positive psychology is the technical study on affirmative human functioning that supports them to flourish on multiple aptitudes like personal, cultural, relational, and global dimensions. Positive psychology lays an emphasis on creating a fulfilling life by fostering and focusing on the strength of the characters of an individual. Positive emotions build through the Broaden and Build Theory helps in building thought-action inventory and their resources, including intellectual, physical, social and psychological resources (Fredrickson, 2001). Positive emotions help in reinterpreting the problems while focusing on self-efficacy and confidence. A happy mind seeks resilience while being aware of the traumas, adversities, and depression in life. The positivity shown in the workplace by colleagues or friends in schools and colleges supports balancing the conflicts with cooperation, empathy, healthy discussion, negotiation, showing gratitude, and humility in interaction. The negative emotions in contrast try to bring down the morale of the team members in the workplace.

Character strength plays a vital role in team dynamics. The situations created in the perspectives of an individual compel them to behave in an irrational way. As Ruch et al. (2018) argued, the differences in the roles played by an individual in the team make a change in the behaviour. Self-motivation or awareness in such a situation may help an individual overcome the conflict; otherwise, the behaviour change may be detrimental to the team dynamics. Agility needs to be in the individual while showing character strength in the workplace. As suggested by Kabat-Zinn (2003), mindfulness with humour helps in human-based interventions where humour skills like laughter, verbal humour, and jokes in the workplace with no intention to hurt anyone's sentiment plays as positive character strength that helps in coping with stressful situations. The presence of such strong character traits also influences others positively in the workplace.

While exploring the character strength, the personal analysis reflects the relationship between wellbeing and stress during the critical situation of COVID-19. I have incorporated the virtues of wisdom, courage, humanity, and transcendence while encouraging my classmates. The critical situation of the pandemic has witnessed unemployment, job losses, life loss, and people going into a deep depression. In such a situation, I tried to keep up my spirits and actively engaged in some activities with devices like laptops and Smartphone while connecting with my friends and families. Kindness, love and motivating other during this pandemic crisis by constantly being in touch with them are all the character strength that I have applied to help my friends gain emotional and psychological wellbeing when they were going through stress and trauma by being isolated. I have applied the virtue of humanity which is befriending people during their crisis.

In summary, it would be the appreciation for character strength that helps individual combat negative emotions. The character strength helps improve the quality of life where understanding self-awareness and developing a positive attitude supports the wellbeing of an individual, team, community, and society at large. Virtues play as the foundation for happiness, which helps emerge as strong characters when cultivated at multiple levels in society. The researchers have shed light on using a balanced approach while utilizing the character strength, which with the negative emotions can ubiquitously help in the wellbeing and growth of the people.